The Batwing Dress of Awesomeness

Well, "The Batwing Dress of Awesomeness" was it's running title and check out that pattern piece - yes, a 1m metal ruler fits across the bodice... 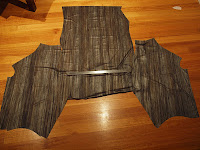 Some of you may recognise #7 from Drape Drape 2, one of the cult of Japanese Sewing Books.
There was much amusement as I tried to explain why I wanted to sew anything from the book and my fashion police looked on in bemusement, as well as a touch of concern...

So, there are some excellent versions of tops #4 and #2 around but not as many of #7 - I found four in my searches: TJ's, Ancien-Nouveau, Lisa of SmallThings and Oui Patrons two.

One of the main reasons I can think of - as in my humble opinion, it is one of the more wearable of the designs - is that it requests 165m wide fabric, and 2m of it at that.

I was also concerned about the straight front as it appears to give the model a tummy, and I already have one of them. 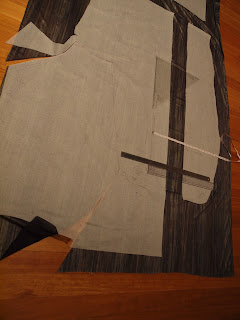 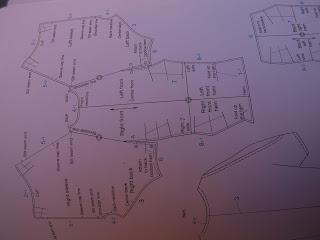 In case you're curious, I used my 90cm wide tracing paper to trace the pieces whole rather than tracing each individual part and then taping them - not having taped paper when I can avoid it is a preference of mine.
The "back hem" left and right joining dots didn't line up for me, but the illustrations are clear enough to make it obvious which way each piece should go.

My fabric is a very light, translucent jersey with a metallic design that I picked up from the remnants table at Clegs - I have around 4m of it in total, so sacrificing 2.5 or so to this wasn't painful as if it didn't work, the pieces are would still be large enough for a top, or three ;)

I was concerned that it wouldn't like being sewn - it didn't like scissors at all, and moving the cutting mat to use the rotary cutter was entertaining, but the design is so forgiving, that a few deviations were negligible. I basted every drape as pins just slipped out, but that made trying it on easy and in the end, the extra width that I'd added across the centre front wasn't necessary and I removed it at the side seams as I overlocked them (4 threads; I used a narrow rolled hem on the open arm slits). 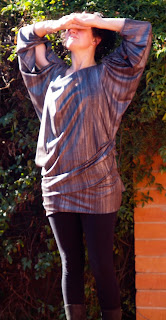 It does mean I have a more draped neckline than designed, but I feel that it follows the philosophy of the author: "The flow and volume of the drape will change somewhat with the material; this is something for you to have fun with as you make the garments!" - Hisako Sato

It was the work of an evening to trace & cut out, then the next evening for basting, sewing & fitting - Serging off the excess material was a breeze and very satisfying!

In summary:
Reviewed on Pattern Review
What did I sew: #7 of Drape Drape 2 in size XL with an additional 20cm across the CF - with one sleeve cut separately so it would fit on 150m fabric.

Does it look like the picture on the pattern - well, taking different weight fabrics into account, actually, yes, it does!

Will I make it again - personally, I don't need more than one bat wing dress of awesomeness, and I'm not tempted to sew a heavier version for me, but if I am looking for a chiffon beach cover up, I do think I just might ;)

What did I learn - That these books have a following for a reason - they have very clear instructions and this one at least, works better than first feared - and that I do love draping.

What do I love about it: It's actually really well designed - that hip hem doesn't ride up when my arms are in the air, or when I bend over to touch my toes - where was this design in my festival going youth!
oh yes, the 80's... 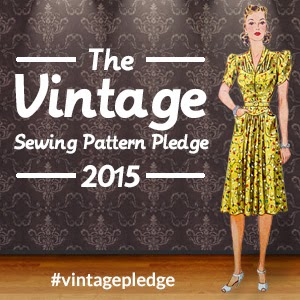